What is an Agile Coach anyway?

Being an Agile coach is a strange role. Only a couple of years ago, the role did not exist. Unless for you being an Agile Coach is the same role as being a Scrum Master, for me that’s not the case. Why?
Given the above, being effective as an Agile Coach can sometimes be harder than we would like, especially on the long run. One thing that helps to make expectation on both sides clear is setting up a coaching contract.

What is a coaching contract?

A coaching contract is a document describing a shared understanding between you and the people giving you the coaching assignment (whether you are an external coach or not does not matter). Sometimes, this means the contract is between you and more than one party, as different (groups of) people in the organisation have different interests and needs.
The coaching contract should be the outcome of a session between you and the other parties. What you put in there and how you phrase it is up to you, but here are some topics you probably want to cover in your coaching contact:
Social contract: What are the roles and responsibilities you have as an Agile coach? What is the scope of your work?
Alliance: how do you and the other people involved want to interact with each other?
Working agreements: What practical agreements do you want to make with each other? 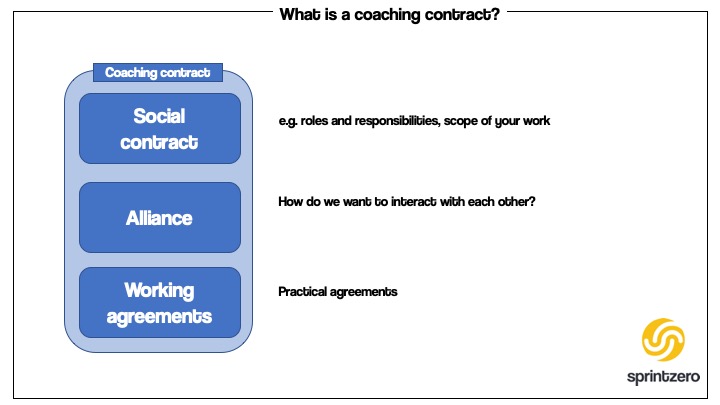 Three Benefits of a Coaching contract

Just to be clear: A coaching contract is not a legal document.

The three most important benefits of using a coaching contract are:
1. Be explicit about your role, mission and expectations. Being clear about those things will really help you, especially on the long run. It will also help you to have a productive conversation when any of the things you agreed on changes (and yes: that will happen).
2. You consciously craft relationships: the act of sitting down together discussing expectations and roles and responsibilities on both sides will greatly help shape the kind of relationship you will all have with each other.
3. It serves as an example for the rest of the organisation. How you do things as an Agile Coach is as important as what you do. Taking the time to sit down and discuss expectations and how we want to interact with each other seems like a simpel, trivial thing to do but it is not. If you think you would benefit from doing this: just give it a try.

Do you want to learn more about being an Agile Coach?